I haven’t posted any pictures of Beckett in a while.  I had another sonogram today.  My last one until he’s born.  I got a good look at his nose and mouth… although it seems his hand was over his eyes again.  He’s so dramatic.

30 Weeks
He looks kinda funny in this one, but those 3D sonos can look a little freaky. 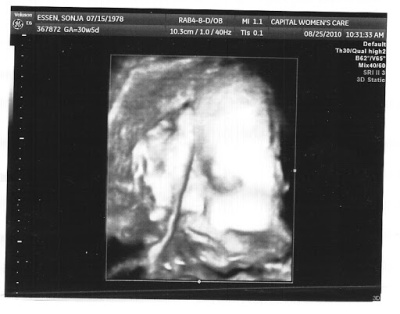 30 Weeks
I say this looks like a Leonardo Da Vinci painting.  What a thoughtful looking baby.

36 Weeks
Kids waitin’ for some boob. 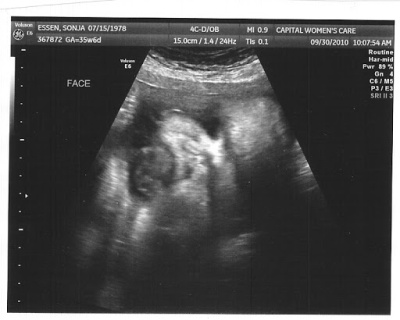 Sunday was a gloomy day with grumpiness galore.  As a cure to the glum day, Ernesto and I took the kids to downtown Silver Spring.  After going to Borders we ended up at Copper Canyon, a chain restaurant located in downtown Silver Spring.  Copper Canyon is one of those restaurant’s that we seem to choose on default because there’s not much else to choose from in that particular location — I mean unless you want to go to Red Lobster or Macaroni Grille etc.   So Copper Canyon it was, where the lights are dim, and Kenny G plays on repeat — but the food is okay and reasonably priced.  After sitting through the waiter’s annoying spiel and false smile, we ordered our food.  I helped Kiera color her restaurant provided coloring page without a second thought, and ate my dinner.  Just a relaxing evening with the family.

But then I actually decided to pay attention to what Kiera was coloring.

The coloring page was covered in stiletto’s, purses, lipsticks and fashion accessories. Huh.  Interesting.  So I looked at Ryan’s coloring page.  Oh how cute.  His coloring page had little buzzing bee’s on it, with little bee word games and what-not.  I looked back at Kiera’s page.  The word finder game had words such as shopping mall, purchase, purse, and an abundance of other words that were so blatantly boasting consumerism and sexism that my brain started spinning.  I tried to take the coloring page from her.  But she loved it.  She loved the girlie things — and of course she didn’t understand what the problem was.  But the problem was the message:  You’re a girl and this is what you should like.  And she clearly liked this message.

But look at where we were.  Downtown Silver Spring.  Revitalized. A consumer’s wet dream with chain restaurant’s and stores galore. Borders, Anne Taylor Loft, Ulta, and an abundance of others. Don’t get me wrong.  I’m not anti-capitalism.  I’ve purchased items from these stores guilt-free.  In moderation of course.  But to distribute a coloring page to a five year old girl boasting the importance of things — of getting — of having — disturbs me beyond measure.  It bothers me that this would be aimed at children — but it is especially revolting because it is aimed solely at girls.  Because this is what society expects these young girls to become. Consumerists.  Selfish, shallow consumerists, obsessed with image and material things.

Yes, we left.  Without saying anything.  And I regret it.  As I walked out I saw a man who looked like the manager, but I just strolled past with my kids — not saying a word.  I should have brought the coloring page with me.  I should have shoved it at him and told him how offensive it is and how horrible it is to promote such crap to little girls.  But I didn’t.

Maybe I’m part of the problem.  Because of my silence, I was saying that it was okay. They probably wouldn’t have done anything about it.  But as a woman and as a mother to a daughter — I should have used my voice.  I should’ve shown my daughter that speaking up is what you do when something isn’t right.

Some may say that it’s just a piece of paper.  That she didn’t understand it.  That maybe I’m overreacting.  But that’s because society has become numb to the problem.  We just roll our eyes and look the other way.  But by ignoring the problem in society — by becoming numb to it — we also become numb to it in our own homes. Which brings in another issue.

Kiera likes all things girlie.  She loves pink.  She loves dresses.  She loves to look pretty. It’s not the end of the world.  I was the same way as a girl.  But I haven’t been the best at teaching her the importance of herself — of who she is.  I pick out her outfits in the morning.  If something isn’t matching quite right, I’ll tell her to change her shirt.  I brush her hair in the morning because she doesn’t do it “good enough”.  I’ve become THAT mother.  I wonder why she’s so obsessed with looking in the mirror, and then I criticize her for having a stain on her shirt.  I may not be boasting consumerism to her, but I realized that I’m no better than that fucking coloring page.  “Look pretty Kiera,” is the message I’m conveying to her every morning.  And don’t get me wrong.  There’s nothing wrong with pretty.  But would it kill me to let her go to school in a mis-matched outfit that she chose herself?  Would it kill me to let her brush her hair in the morning and not criticize?  But more importantly, am I not killing her sense of self by promoting looks and image every day?

When she walks out of her room all dolled up saying, “Don’t I look pretty?” or when she tells me that she wants to be a “pretty womans” when she grows up — I’ll just cluck at her like a mother hen and shake my head disapprovingly.  “There’s more to life than looking pretty, Kiera,” I say.  And then I go back to my business.

But my daughter is still there.  Waiting to be taught.  Waiting to go out into the world.  And that’s all I say?  There’s more to life than being pretty? But what more is there?

Your brain, Kiera.  Your disarming intelligence.  Your creativity. The gifts of your big personality.  Your kindness.  Your ability to stand up for yourself. The amazing optimism that you were born with.  Your lovely spirit.  Your love for life.  All those things are more important than being pretty, Kiera.

On September 9th, 2010, the New York State Department of Health started a new breastfeeding campaign aimed at lower-income women.  The campaign is called, “Breastfeed For My Baby. For Me.”  Part of this campaign will include TV ads that will run through October.  I find the ads condescending and belittling to women.  The ads also perpetuate a common breastfeeding myth… that you will lose weight if you breastfeed!  Well, it was a myth for me anyway.  Sorry if the YouTube vids are cut off a bit.  My page layout is whacked.  But you’ll get the idea. Watch:

Yes low-income ladies! Breastfeed so you’ll look fabulous! Plus there are health benefits for the baby.  But breastfeed so you can be skinny like all the ladies who have more money than you!

It may be argued that we should be happy that women breastfeed no matter what reason.  But I don’t think these ads will have much of an effect on the demographic it’s aimed at.  One, I know that studies say that women burn more calories and therefore lose more weight while breastfeeding.  But I, as well as many other women have found this to be untrue.  The weight comes off slowly and it took me about a year before I got my body back (which wasn’t really my previous body what with all the stretch marks and extra belly skin).  In addition, learning how to breastfeed is hard.  HARD.  Women need almost constant support and encouragement in the first weeks of breastfeeding.  And if that’s lacking… they sure as hell won’t continue breastfeeding just because they want to look svelte.  Women in general will make peace of mind and sleep a priority over losing baby weight. Furthermore, if you want to aim a breastfeeding ad at lower-income women, you might want to mention that they can save almost $2,000 on average in the first year of life.  Yes, formula is expensive… especially for lower-income women.  I think that would make a bigger impact then telling them that breastfeeding is like a free Jenny Craig weight loss program.

In contrast, let’s take a look at Canada.  Yes, wonderful down-to-earth, sensible Canada.  In Nova Scotia for example, they have a breastfeeding campaign called, “Breastfeeding.  Learning Makes it Natural.”  And let me tell ya… it’s a breath of fresh arctic air.  The ads are simple, and make a damn good point: Breastfeeding takes time and practice. Again, the vids are cut off a bit. Watch:

How simple! How intelligent! How un-obnoxious!  I don’t know how effective these ads will be, but it gets a realistic message out there.  The message is:  We know it’s hard.  Stick with it.  Practice. It WILL get better. We support you.  And eventually it will be an enjoyable experience!

It doesn’t treat women as shallow beings who only care about their image.  The New York Department of Health sure could use some Nova Scotia brains.

It’s been hot. So so so hot. I’ve tried to take daily walks to get my pregnant body moving, but some days were so hot this summer that I would go a week without going for a walk.  I would just send Ryan out with Banjo.  But on the days that I was able to get out and tolerate the heat, I would take a walk.  Yes, this was very exciting for me.  Walking up the street and back.  Weeee!  But yeah, I can’t wait for cooler weather so I can walk on a daily basis.  Rock n roll!

And Ryan is so cute.  Whenever we go for walks, he talks non-stop about his invention ideas and his time machine that he will invent when he’s 24 years old.  He’s got big plans people!

Just some pictures of my kids eating or playing with pasta. Amazing!

Impeccable table manners if I say so myself.

My Other Brilliant Insights